I hit this fun bug this morning and wanted to share it. It’s quite unlikely that you’ll hit it yourself, so the value here is probably as much in the debugging as it is in helping folks down the road fix this should they find it via Googling.

I clicked to install VMWare workstation, and was greeted with this: 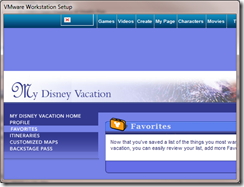 Yes, you’re seeing that correctly. Rather than seeing a normal installer window, I was looking at a Disney Vacation site. At first, I thought I must’ve had a virus on my computer but ruled that out pretty quickly. If it were a virus, I’d have been seeing pr0n or warez or some other such thing, not a Disney site… especially not a “static” Disney site.

The programmer in me isn’t thinking “Why isn’t this working?”. Instead, I’m thinking “What would cause an installer to display a Disney html file?”

I wanted to explore the idea of something hijacking the file first. The question is… what file? This was easy to find. I simply looked in the VMWare workstation installer log and looked at what files it was unpacking and writing. Here’s a snippet:

I opened that index.htm file and sure enough, it was the Disney html. So, off to see what activity was happening around index.htm. To do that, I used Sysinternals Process Monitor. This simply involved firing it up and adding a filter for index.htm to get rid of the copious noise that Process Monitor spits out by default.

Looking at the output, the answer became obvious. The first instance of an index.htm was in c:\<path_to_my_downloads>\index.htm.  Then I saw the index.htm in the temp directory. Ahhh…. so the installer was creating a file in the same directory in which it lived and then copying it into the temp directory.

I’m sure you see where this is going.

I headed to my downloads directory, and there she was… index.htm, Disney-fied.

How does this happen?

You might be wondering how in the heck that Disney index.htm file might have gotten in my downloads folder. The answer is simple: I have kids. If you’ve ever watched a kid use an internet browser, you’ll see them mousing around and doing all manner of weird draggy things that inevitably involves downloading a bunch of web files (usually images, but occasionally they can manage html files) into wherever you have configured downloads to go. It’s usually harmless.

In this case, you can probably imagine the code in the installer: “if !fileExists…, write index.htm” …. “copy index.htm to temp\vmware_blahblah\index.htm”

But why would you, the installer writer (or the program that emits the installers), fail to handle the case when there could already be a file like that in the place where downloads go?  It’s a stretch, and that’s why this is such a fun bug.