Labels: eclipse, timesavers
This is part of an ongoing series on Timesavers. The goal is simple: short, easily-digestible posts designed to help developers get faster and more productive

This TimeSaver is dedicated to showing how Eclipse makes these operations a snap. Of course, we're talking about the keyboard. As you work with Eclipse, you'll learn that its developers are highly fond of keyboard shortcuts. Hit CTRL-Shift-L to see the current active shortcuts, also known as "Bindings".

Getting to open files quickly

First, put down the mouse. It's sucking time away from you and your precious code! Every time you find yourself grabbing the mouse to go to an already opened file, stop. Pinch yourself. Yank on the cilice. Whatever. But put the damn thing down. And hit: Ctrl-E Go ahead, try it right now. We'll still be here. Go to Eclipse, open up a few files, and then hit Ctrl-E. Pretty, isn't it? 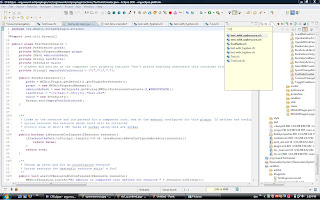 Notice how, like so many popups in Eclipse, it has a little area at the top where you can type? It's a filter. You can use wildcards, too. My favorite way to use it is when I know what file I'm looking for, let's call it "SomeTest.cfc", I hit Ctrl-E, type "So" and it'll filter down to the file I'm looking for. Hit Enter, and bam, you're at the file.

Back from whence you came

In that third scenario up above, you edited a file, went somewhere else, and then wanted to go back where you were. Eclipse has a shortcut for that: Ctrl-Q. Go ahead, try it.

Did it work? If you were editing a CFM or CFC file in CFEclipse, it probably didn't. That's OK. We're going to take care of that. CFEclipse overrides the Ctrl-Q binding with the "repeat last tag" action. I personally don't use that, so I want to get rid of it. Let's open up the Keys preference page. The sloooooow way: Window -- preferences -- filter on keys The fast way: Ctrl-Shift-L, Ctrl-Shift-L again. Go ahead, try it. It's going to pop up a window that looks like this. 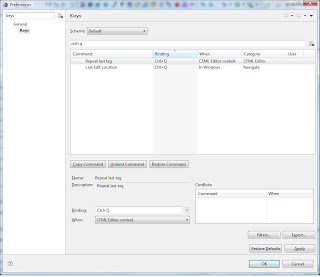 Now, in the filter box, type Ctrl+Q. Note the "+". You should see two entries. Simply remove the binding for "Repeat last tag" by selecting it and then clicking the "Unbind Command" button, or if you like that, you can assign it to another keyboard shortcut. Now, edit some text, move to another file, then hit Ctrl-Q. Bam... back where you were. Nice, eh?

You know you've written some really long files in your day. Admit it. Sometimes, you actually have to maintain those works of modern art, and it's nice to be able to get quickly to where you need to go within that file. Usually this comes from a bug report with a tag context / stack trace attached to it. Simply hit Ctrl-L, then type in the line.

Ever wanted to just toggle through your open tabs? Simple: Ctrl-PgUp to go leftward through your tabs, and Ctrl-PgDown to go rightwards

The Back Button, Eclipse Style

I'll admit, this isn't one I use much, but maybe you'll get some mileage out of it. It's like your browser's Back button, but for Eclipse: Alt-Left Go ahead, try it. Guess how you go "forward".... yup. Alt-Right

dude! I knew some of those, but ctrl-E and ctrl-Q are brilliant! Love this series from you.

A little addition for using the filter of the open file list (CTRL-E):