How I Save Energy

Labels: energy saving tips
Computers suck a lot of energy, as do the peripherals connected to them. Even when turned off, all devices draw at least some current. It's a trickle, but it adds up. First, the setup: I have a HP running Vista 64bit with two 19 inch monitors, a printer, speakers with subwoofer, cable modem, vonage router, and wireless router. The goal: When the PC shuts off, keep the cable modem, vonage, and wireless router still juiced, and completely kill the other peripherals... I don't want them drawing any power at all. Even better goal: not have to turn the PC off at all to make this happen (because PC startup takes a while). Even better: only a few minutes after I finish using the PC, have it shut down such that all peripherals are invisible to the grid, and with a mouse click, have everything back up within 10 seconds. No data loss, either, obviously. At home, here's how I contribute some treehuggin granola and lovin' to Mother Earth. Some time back, I heard of the Smart Strip power strip, a strip that enables a "controller" outlet to effectively cut off power to all other plugged-in devices when that controller itself is turned off. Seemed like a reasonable idea, so I bought two: one for my TV/devices and one for my computer. I'll focus on the computer with this post. I have the computer plugged into the control outlet. Monitors, printer, and speakers are plugged into the "controlled" outlets. Cable modem, vonage, and wireless router are plugged into the "always hot" outlets. Thus, when the PC is "off", the big-energy-sucking devices go dead while the ones I need to have on stay active. That's part 1. Some pics 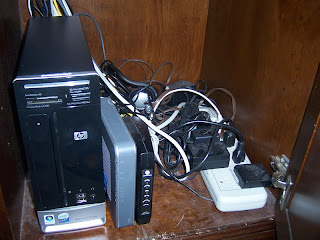 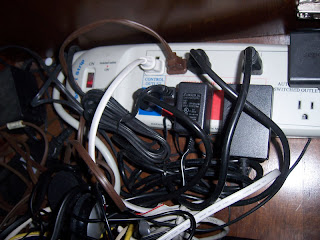 This is all well and good... turn the PC off, and save some money and some trees. But that's not good enough. I want it to be brainless... I don't want to have to turn off anything, and I don't want to have to wait a few minutes for everything to boot back up. I want it to happen automatically, and have my entire "state" retained when it comes back up. So, on to Part II of how I'm saving the world. "Sleep" to the rescue. Now, back in the XP days, I remember sleep flat out sucked. It took forever to come back up, often longer than it would've taken to shut down and restart the PC. With Vista -- at least in my experience with this particular PC, sleep is quite good. I have my power options set to turn off the monitors after 5 minutes of inactivity and Sleep the computer after 10 minutes. Thus, 10 minutes after I walk away from the thing, my state is retained and everything "shuts down". All earth-melting peripherals are off the grid. Angels weep at my magnanimousness. Babes swooooon. Now, some latte-sipping hypermiler choad is saying "But that's 10 minutes! What about the Northern endangered spotted Newt! You're killing the Newt you paint-drinking techno-earthkiller!". OK, I'll grant that in those 10 minutes, multiplied by say 10 times a day or whatever, I'm not winning any Al Gore Humanitarian awards. So, on to Part III, for the Prius set. In Vista, you can control what the "power" button does. That's the little round thing with the bar up the middle. I have it set so that when I hit the power button, the computer goes to "sleep". This is not windows XP sleep. This is Vista sleep (again, at least on my PC). And it shuts down within about 5 seconds, and when I wake it back up with a single mouse click, it's ready to roll in about 5 seconds. Full network connectivity takes somewhere between 15 and 30 seconds to reestablish. I know it's back up when TweetDeck chirps. Now, I did hit a snag initially with keeping the router Hot. The PC would sleep, but then it'd come back to life a second or two later. I had to go into device manager, find the network controller, right click and select "Properties", go to the "Power Management" tab, and Deselect "Allow this device to wake the computer". Bottom line: for me, the Smart Strip + Vista + Power Options + Sleep-on-Power-Button combination has been a win.

It would be interesting to use a power meter to see the difference in on vs. sleep vs. off and how much power each mode actually consumed.

Check out Ward Cunningham's rad method to use 1-Wire Digital Thermometer and Flot/JQuery and other stuff to measure and graph room temps. I assume you could also ping a powermeter, if a similar device is available.

Cool stuff. I've been thinking about getting one of those myself.

It is not as sophisticated as your set up, but in my home office, I have all of my peripherals plugged into a switched socket. It is ordinarily a bedroom so there is a switch at the door that operates a couple of electical sockets around the room. I have my printer, speakers, scanner and a couple of room lights connected to a power bar plugged in to one of these sockets. I can switch them on when I enter the room and switch them all off when I leave. I got really tired of having them on all the time or off when I needed them.

Magnus, your method brings something to mind for me. We built our house around 3 years ago, and I can only remember one or two things we did with energy savings in mind. In retrospect, that was obviously foolish. And what you're talking about would be something really simple, if only we or the builder had thought of it. In my home office, we have one switched outlet, but it's to an outlet that's on the opposite end of the room from the computer, so it's not quite tenable for me. But what if, when we built the house, we had planned for that kind of thing... just put a switch and outlet right near where the computer would most likely be. No more cost, but it'd be easier to remember to do.

For me, it's too polyanna-ish to think that I'd remember to walk across the room, turn things off, etc. But if it's right in front of my face, yeah, I can do that.

So, the more obvious things are, the better.

I hope to build another house before I die (well, not literally build it... commission it to be built). and when I do, I hope technology and building methods have progressed to the point where even little things like this are "just the way things are".

thanks for putting in your 2 cents!

it helped me understand alot about what we and do to lower out monthly bill from the power company the site is.

and the grate thaing about it is after you find the ways to save you can get them right their. prices are good and shipping is not bad